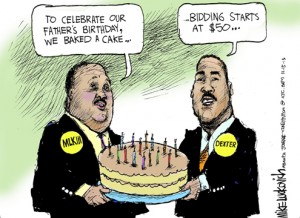 Imagine taking a trip to Nazareth. After seeing several historical sites you go into to a bookstore dedicated to the life and legacy of Jesus Christ.  Inside the bookstore you see bestsellers like “Zealot: the Life and Times of Jesus of Nazareth” by Reza Aslan or “Killing Jesus: A History” by Bill O’Reilly, but conveniently there are no copies for sale of Matthew 5:5, “blessed are the meek, for they will inherit the earth.”

That is how I felt last summer when I visited the Lorraine Motel in Memphis, TN.  The site of King’s assination is now the National Civil Rights Museum and on ita surface a momument to king’s legacy. Prior to my visit, I had recently read a Blog post about how Dr. King had once written a proposal for a nationwide job guarantee. With this article in the back of my mind, I noticed there was little mention of King’s economic views in the museum, despite the fact that the March on Washington was officially called, “the March on Washington for Jobs and Freedom.”  While it was important enough at the time to put the word “jobs” before the word “freedom”, you would never have known this from visiting the museum. I was even more astonished that  the museum bookstore, I noticed, sold no less than 50 books about Dr. Martin Luther King, Jr. written by outside authors, but  did not sell Dr. King’s last book, “Where Do We Go From Here, Chaos or Community.”  (you can read the book for free by clicking the hyperlink) This book outlined the need for better jobs, higher wages, decent housing, and quality education. It was in this book King said he was convinced that the “solution to poverty” could be attained through “guaranteed income.” Interestingly, the book fell out of print for a while and has only been available to the public since 2010.

Later, I discovered why King’s message of financial equality has been hidden to the point that it almost didn’t exist –   the museum, this embodiment of King’s legacy, is owned by a foundation made up of several corporate partners, including FedEx, Autozone, and Exxon Mobile. With this information, I cynically realized that I needed no more explanation for why a book about guaranteed income and the rights of workers was not for sale.

How much is a dream worth?

The National Civil Rights Museum at the Lorraine Motel opened for business on September 28, 1991. At its opening, Memphis resident, Jacqueline Smith has stood outside the building protesting its 9 million dollar price tag, believing that the money could have been better spent housing, job training, other services for the disadvantaged.  I saw Ms. Smith the day I went to the museum and while I don’t agree with all of her views, I was somewhat bothered that millions of dollars were spent on a museum to honor the late Dr. King, yet nobody bothered to keep all of his books in print. Especially when you consider that at the time of his death, Dr. King was in Memphis to support a strike of African-American sanitation workers. Supporting the rights of workers and calling for more jobs and higher wages is a major part of King’s legacy, yet it’s rarely mentioned.

A legacy for sale

I tell this story because yesterday was Martin Luther King’s day and hearing people discuss the holiday reminded me of my visit.  I heard pundits say things like the “King’s dream has been realized” while pointing to powerful wealthy figures like President Obama, Oprah Winfrey, Colin Powell, and Magic Johnson. I think the pundits are getting Dr. King’s dream confused with the philosophy of Atlanta rapper Wakka Flocca Flame.  Not that I’m against being “color blind” when it comes to money, but I don’t recall King saying anything about a small group of African-Americans gaining wealth and political influence, but King’s dream speech did mention .

I suppose it is easy to get confused since Dr. King is looked at as a symbol, a martyr, and a dreamer when in reality King was a thinker, a doer, and a radical.  It doesn’t help that the King Family has sued news media for the unauthorized publication of King’s writings and speeches, while at the same time, the family has sold King’s image for corporate use in commercials. By watching television, it’s easy to get the impression that King dreamt that one day all people, regardless of race, might be able to have top notch phones and drive a European luxury car. These commercials, of course, are completely contradictory to the actual writings and teachings of King, who wasn’t just selling a dream, but selling actual policy changes like the Civil Rights Act of 1964 and the Voting Rights Act of 1965.

Contrast this to the press release by President Obama yesterday who said we must honor Dr. King by standing for “good jobs and fair wages” while tweeting a picture of himself next to the King Memorial. I am certainly not against “good jobs” or “fair wages”, but the problem is that these are not concrete terms.  The definition a “good” job or a “fair” wage are completely subjective descriptors that vary from person to person, whereas the idea of “guaranteed income” is an actual policy description and a suggestion that would improve the human condition.

I know that all politicians do this and I am not writing this to attack President Obama. But it is yet another example of the subversion of king’s dream. Rapper Kevin Gates, in the song “Wish I had it,” states that “a vision without action is merely a dream. Action; it’s the grind, it the hustle, it’s the persistence.” Dr. King was more than a dreamer, he was a man of action.  On the third Monday of January every year, the country honor’s King’s dream. For the rest of the year, it’s time we start honoring King’s actions and start supporting real policy change.