So last week, TMZ.com posted a recording of Los Angeles Clipper’s owner Donald Sterling discussing the beauty and importance of diversity. Wait, my bad. I mean TMZ.com posted a phone call, recorded by Sterling’s ex-girlfriend V. Stiviavino of Sterling going all 12 Years of Slave on Stiviano because she  instagramed pictures of herself with black people at LA Clipper games. 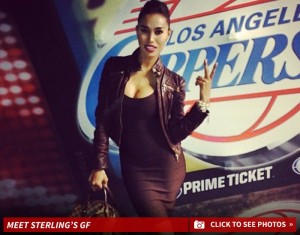 As Deadspin reports, ” the heart of his complaint is that by “associating with black people,” his girlfriend (who identifies herself as mixed-race), is preventing herself from being “perceived as either a Latina or a white girl.” This is “painful” to him, Sterling says. “It bothers me a lot,” he says.Sterling was specifically outraged because his girlfriend posted a photograph of herself with Magic Johnson. “Don’t bring him to my games!” he says, of the Los Angeles Lakers legend. 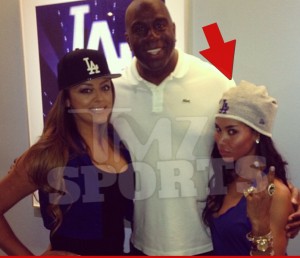 The picture that started it all.

As terrible as this all is, the extended version of the recording is even worse. Deadspin.com was able to obtain the longer track and the transcript reads like a script for the re-boot of Birth of a Nation. Here some of the …I guess highlights?

ON HOW LUCKY THE CLIPPERS PLAYERS ARE THAT STERLING LETS THEM WORK AT THE STAPLES CENTER:

V: I don’t understand, I don’t see your views. I wasn’t raised the way you were raised.

DS: Well then, if you don’t feel—don’t come to my games. Don’t bring black people, and don’t come.

V: Do you know that you have a whole team that’s black, that plays for you?

DS: You just, do I know? I support them and give them food, and clothes, and cars, and houses. Who gives it to them? Does someone else give it to them? Do I know that I have—Who makes the game? Do I make the game, or do they make the game? Is there 30 owners, that created the league? 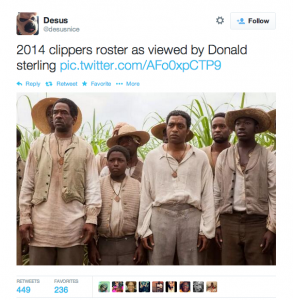 STERLING WANTS TO BRING BACK THE ONE DROP RULE:

During the extended version of the phone conversation, Sterling even goes in on Los Angeles Dodgers outfielder Matt Kemp who also appeared in an Instagram photo with Stiviano. 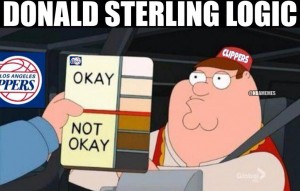 V: Honey, if it makes you happy, I will remove all of the black people from my Instagram.

DS: You said that before, you said, “I understand.”

V: I DID remove the people that were independently on my Instagram that are black.

DS: Why? V: I thought Matt Kemp is mixed, and he was OK, just like me.

V: I met his mother.

DS: You think I’m a racist, and wouldn’t—

It gets even worse from there. Hit the link if you want a good hate read/listen this morning, including Sterling’s enlightened views on Black Jews in Israel. This is objectively, depressing. However, many of these famous people acting all surprised and upset are suspect. Here’s just a few small reasons why:

And this guy was, until yesterday, was the intended recipient of the 2014 National Association for the Advancement of Colored People’s Lifetime Achievement Award. HA!  As incredibly sad as this all is, I think what is even sadder is that Donald Sterling has been able to say and act this way for years without repercussions. 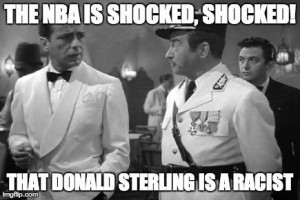 The NBA has launched an investigation into this debacle but really this should have happened years ago. And does anyone know what they can actually do to him? I mean he owns the Clippers, he isn’t the Montgomery School Board. 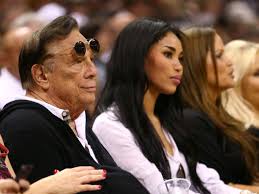 Side note: His girlfriend is probably as damaged as him when it comes to race. Stiviano, who is of mixed race begins the conversation by saying she wishes she could change the color of her skin.  I don’t even want to imagine what sort of quadroon ball/ broken race/sex dynamic that was going on between the two. It make me sad. Especially since Sterling used to take girlfriends into the Clipper’s shower room while team members were showering and instruct the women to look at their beautiful black bodies. **shudder**.

← “Do you only date White girls now” and other links for Tuesday.
Update: Donald Sterling’s girlfriend recorded over 100 HOURS conversation between the two…someone is about to get paid. →