I was scared to write this article.  I remember watching an interview several years ago where Larry Bird said he felt “irritated when (another team) put a white guy on him.”  My reaction to this statement was, “I feel you Larry.”   But when many in the media reacted negatively to Bird’s comments, it became abundantly clear that white people are not supposed to criticize how white people are perceived to play basketball.

In a recent interview with the Bleacher Report, however, former Duke player Grant  Hill theorized that people hate Duke because Duke has always had a lot of “really good white players.”  Hill also noted that most of Duke’s opposing fans in the stands are white and called their feelings towards Duke “white on white hate.”

Hearing this interview inspired me to open up about a secret I’ve been carrying.  I, like thousands of Americans, suffer from NCAA Induced Reverse Racism Syndrome (NIRRS). I could be like most Americans, and hide my reverse-racism by using coding language like “I hate Duke,” but I am going to be honest, my basketball views towards white people are a “little racist.”  Before you judge, let me explain.

I love Larry Bird and my issues are mostly about college basketball, not the NBA.  My frustration with white college basketball players began within the last 20 years when the college basketball media called this guy, this guy, this guy, and this guy the Next Larry Bird.  Once turning pro, Keith Van Horn, Wally Sczcerbiak, Adam Morrison, and Gordon Haywood combined for exactly zero All-Star Appearances.  (Congratulations for joining the list in 2014, Luke McDermott)  And to quote Larry Bird, the comparison of these players to Larry is “insulting.”  Hell, Larry Bird is 57 years old and he would still probably be pissed off if of one of those players was tasked with guarding him in a pickup game.  Anyway, this obsession with finding the “next white hope” has mostly amused/annoyed me, but this year I developed full blown NIRRS.

This year, my alma mater, otherwise known as my favorite team, and unhealthy obsession, the University of Kentucky Wildcats made an unexpected run to the NCAA Championship game, finally losing to the Connecticut Huskies.   I am only partially joking when I say I am still recovering emotionally from the loss. 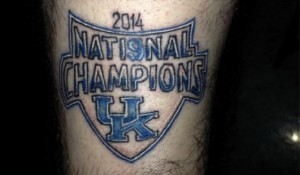 you think I’m obsessed? this guy got this tattoo… before the tournament even started…

Throughout the tournament, every team the Cats played always had at least one white player who played a lot of minutes and  who happened to be good at basketball( i.e. which side note, the fact that announcers always seem surprised that a white player is really good at basketball is hilarious, since you know they are playing college basketball, which would imply some ability to play the sport). Without fail, each and every game, I despised, no hated, these white players more than their minority contemporaries.  For example, in a Sweet 16 matchup against arch-rival Louisville, YMCA rec-league superstar Luke Hancock drove to the basket and dunked the ball on my Cats.  And honestly, I wasn’t just angry because my team got dunked on, it hurt a little bit extra because Hancock is white.

Even if he didn’t play basketball, that beard alone says “hate me.”

Kentucky prevailed and went on to play Michigan in the round of 8 where a chump named, Nik Stauskas, scored 18 first half points with 7 of them being free throws. As the announcers espoused on his amazing skills and described his game as “thinking man’s basketball”…whatever the hell that means, I just got angrier and angrier at all the points he was accumulating. Yes, I can acknowledge I dislike any player, black or white, that scores a lot on the Cats, but there is a special level of disdain for white players, an automatic belief that the referees are going to let them draw fouls because they are white. Eventually,  Kentucky was able to overcome Stauskas, meeting up with the Wisconsin Badgers in the Final Four…oh, the Badgers…I don’t even know where to start…facing off against the Wisconsin Badgers, or more appropriately the Wisconsin Buzzcuts  brought my reverse-racism  to an all-time high.

Look, I am sure the guys who play for the Wisconsin Badgers are great people. But the team as a whole hits every trigger of my reverse racism button. First,  they definitely try and personify image of looking like an “Indiana High School Basketball Team from the 1950s” that “plays the right way” . Which, fine, sure if buzzcuts, playing below the rim, playing slow, and  overall blandness is your thing – go for it.  But when the media calls this “old fashioned basketball,” their words carry a lot of racial undertones that  I simply can’t stand.

The Myth of the White College Basketball Player:

When announcers talk about teams like the Badgers, they inevitably hit every stereotype that white players personify. Whereas a black player would be described as “naturally gifted” on the court, a white player is described as a “hard worker.” And don’t get me started on the term “fundamental” in relation to white players.  This is code for “these white guys play really well, but don’t dunk a lot.”   At this point, I am sure there are some who think I am reading too much into things to validate my own reverse racism.  But in 2010, when a white bigot tried to start an all white basketball league, he stated that it would be a league for “white players to play fundamental basketball.”  And no, that wasn’t an onion article, a crazy racist really tried to make such a league.   And look at this classic story about Ohio State’s white point guard.  The title discusses his “hustle” and “hard work” and the article states that “if you want to talk student athlete, he is your guy.”  What the hell does that mean?  That white players personify students more?  And I’d like to pass it off as a crazy blogger or a sportswriter covering the All White Pro League, but it was the friggin USA Today.   And speaking of USA Today, I loved this article where they asked the Wisconsin players what other teams thought about them:

Honestly, I am surprised, someone didn’t thrown in “fundamentally sound.”  And coach Bo Ryan even stated “not one of our guys said ‘athletic, did you notice that?”  I did notice Ryan, I did. And I’d argue that the mythos of the white ball player that your own (predominantly white) team promotes also promotes many of the false stereotypes that permeate college basketball.

Here are some of the most egregious examples of these stereotypes

Nothing makes me want to choke on my own vomit more than when a white player is said to have “surprising athleticism.”  You mean an NCAA Division 1 athlete, who works out five days a week, who will lose his scholarship if he doesn’t perform well at his athletic endeavor, is athletic?

In college basketball, how obnoxious is it when a team full of white players are “students first, athletes second,” while a team of mostly black players is perceived to value turning pro over receiving an education?  These messages were scattered throughout the Kentucky v. Wisconsin game, but the truth is that Kentucky actually had a  significantly higher graduation rate than Wisconsin.  Still, who needs facts when stereotyping is so much fun?

We Do Hate Duke: 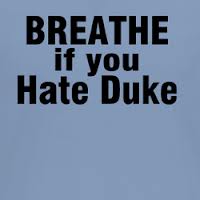 “Thank you very much, for reminding me of the reason why I left Duke. People like you cannot and will not (sic) ever understand my situation. I’m sure Daddy worked very hard to send your rich self to college. While real people struggle. I would also like to extend an invitation  for you not to waste your or my time ever again. Never being considered a part of your posh group of yuppies really hurts me to the heart. Yeah Right, because I don’t care about you or your alumni.”

I realize that none of the points I’ve made actually excuses my hating of white basketball players. Especially since its not the young players fault they receive advantages that come from the coded language, the stereotypes, and white privilege in general.  But when you grow up in a place like Kentucky, that lives, eats and breathes college basketball, you become, passionately (some might say obsessively)  and emotionally connected to your team, and by extension, the players on your team.   I take so much pride in my school, my team, and my state that I notice every slight against the C-A-T-S, including the unfair racial privilege that the Cats encounter when they play predominantly white teams.  And it hurts.  And I am not the only white person who reacts this way. In fact, many of my fellow UK fans, friends and family members suffer from NIRRS.  We want our team to win and we want the game to be fair. After all, in sports, race isn’t supposed to matter, right?  A basket is a basket, a foul is a foul, and a travel is a travel.  While this is a noble idea, we know that race does matter.  We know that sports are not color blind, (as evidenced by the coded language) and we know that sports, like life, is not fair.  But it bothers me because I want my team to win and I want the media to write fondly about them.

Sadly, in my life when I am not watching basketball, I probably do not notice such white privilege as often as I should.  And is reverse racism any better than just straight up racism? After all, isn’t any form of racism bad even if it is white on white racism?  I know that the University of Kentucky basketball and racism used to have a pretty cozy relationship, so even mentioning them in a story about reverse-racism seems wrong …..but part of me thinks that suffering from NIRRS might be a good thing. Hear me out:

In the future, there might be a judge or politician who is tasked with examining  policies and laws like Stop and Frisk, felony gun laws, stand your ground laws, and other legal fictions that clearly target and harm African-Americans.  Perhaps this future judge or politician will have attended college at Maryland, Virginia, Syracuse, Kentucky, or one of the many other colleges and universities that  bitterly hate Duke and have a largely black basketball team.  Maybe this person, in a moment of insight, will recognize that the pain they have when Duke gets favorable calls for being “fundamentally sound,” while their teams are called “undisciplined,” applies to real life laws and policies that disproportionately effect African Americans. Maybe?

Or perhaps I have this all wrong.  Maybe I wrote over 2000 words to assuage the guilt I feel for being a racist even if it is directed at my own race.  And I guess its hypocritical of me to criticize white vs. black stereotypes but then possess my own stereotypes and biases in believing that the refs favor white players, that all white players flop, and that white player must have hooked a black player to drive by him?  Yes, like many who try to talk about race, my beliefs are based on a little bit of truth, a little bit of unsubstantiated opinion disguised as fact, and a little bit of hypocrisy.  But despite my hypocrisy, I know that NIRRS doesn’t just go away…when next basketball season comes along, in the heat of the moment, I will probably think that every time an opposing white guy draws a foul, that the white guy flopped.  And for the foreseeable future, like most of America, I am probably going to continue hating Duke….. Especially Laettner.  And Bobby Hurley.  And Erik Meek.  And Steve Wojciechowski.  And J.J. Reddick.  And Jon Scheyer.  And Greg Paulus.  And the Plumlee clones. 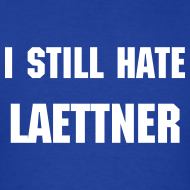 1 comment for “NCAA Induced Reverse Racism Syndrome: The first step is admitting you have a problem”