Inspired by Richard Howard’s truly excellent article on Deadspin.com “Richard Sherman and the Plight of the Conquering Negro” I initially intended this post to focus on how the media punishes black men in the context of achievement. There is ample proof of that in the case of the Richard Sherman incident. As Howard points out

When you’re a public figure, there are rules. Here’s one: A public personality can be black, talented, or arrogant, but he can’t be any more than two of these traits at a time. It’s why antics and soundbites from guys like Brett Favre, Johnny Football and Bryce Harper seem almost hyper-American, capable of capturing the country’s imagination, but black superstars like Sherman, Floyd Mayweather, and Cam Newton are seen as polarizing, as selfish, as glory boys, as distasteful and perhaps offensive.

Take a second to read Howard’s article, it is worth it. The articles and stories written surrounding Richard Sherman’s rant make it pretty clear that society still loves suffocating black men with the big black brute label. It is also pretty clear that Richard Sherman is an emotional smart guy who says dumb things sometimes. But the longer I stared at article headlines and read some of the reporting on this story, the more troubled I became by the media’s perception of Erin Andrew’s reaction to the interview. I think Andrew’s interview and subsequent media response reveals as much about societal sexism as it does about racism.

Divorced from race or gender filtering, Andrew’s interview reaction was hilariously awkward. Akin to watching the time Kanye West blurted out “President Bush doesn’t like black people” during a live telethon to raise money for Hurricane Katrina victims. Politics aside, watching Mike Meyer stand next to Kanye in pained, stilted silence while he struggled to formulate a response is fantastic tv. 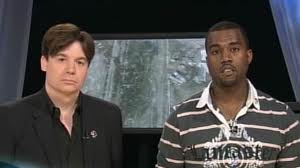 But other people watched Andrews interview Sherman and saw this 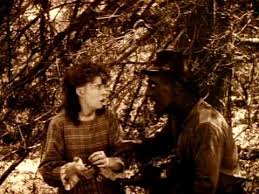 Erin Andrews is a reporter. Erin Andrews is a white woman. And according to the media, Sherman went crazy on Andrew during his interview and scared her. Many of the reports on this incident explicitly categorized Andrews as being scared or afraid of Sherman during the interview. My two favorites are “Richard Sherman Breaks Pass, Wins Game, Goes Nuts on Erin Andrews” and Richard Sherman Rant May Have Scared Erin Andrews, Definitely Bothers Some on Twitter. This reaction is troubling. Not only does it reveal society’s long standing fears about black men, it is sexist. Deeply sexist. A fact that appears to have gone unnoticed. The media would not have labeled a male reporter in the same situation as scared. He would have been “taken aback.”And objectively Erin Andrews didn’t look scared, she looked “taken aback” i.e. “caught by surprise.” Let’s put what happened in context. Say you are at a park. Your sitting on a bench as some cyclists ride by. As they turn the corner, the cyclist in front begins to wobble and suddenly crashes to the ground. The other cyclist narrowly avoids hitting the fallen bike and cyclist before managing to skid to a stop a few feet away.

To be fair, the first cyclist was a little distracted.

You being a callous uncaring human being ignore the fallen cyclist (the ambulance will get her) and run over to the guy still standing and ask if he’s ok. Instead of the “yeah, I am ok…its kind of weird you ignored the lady moaning and crying over there” you expected, he barks out “I GOT this, don’t you know I am the best cyclist in the GAME! Eddie Mercyx ain’t got nothing to say about me!” Guess what? White, black, male or female, I don’t care who you are, you’d get that blank deer in the headlights expression Erin Andrews had on her face when she interviewed Sherman, like this 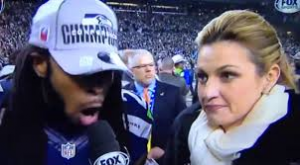 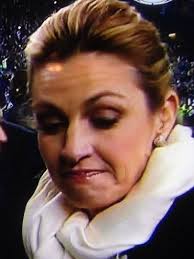 Situational surprises are weird. They surprise us. We are taken aback.

Erin Andrew’s Reaction: “That was awesome and I loved it.”

And yet, Erin Andrews has had to break her neck to assuage the concerns that she was scared of the big black man. In an interview responding to Sherman’s rant, Andrews made it clear that she was not intimidated by Sherman stating,

“I don’t want this to look like I was upset with him, I was frightened, I felt threatened, we all like Richard Sherman a lot at Fox,” Andrews told For The Win. “At that moment I saw how crazy it was going to blow up, and I wanted to make sure people knew it wasn’t a situation where I’m a victim and he acted like an idiot.”

Andrews went on to state, “You expect these guys to play like maniacs and animals for 60 minutes,” she said. “And then 90 seconds after he makes a career-defining, game-changing play, I’m gonna be mad because he’s not giving me a cliché answer, ‘That’s what Seahawks football is all about and that’s what we came to do and we practice for those situations.’ No you don’t. That was awesome. That was so awesome. And I loved it.”

Do you know why Andrews is so eager to clarify that she was not afraid of Richard Sherman? Andrews knows that the handwringing by some white people over whether or not she was scared by Richard Sherman’s rant is NOT GREAT for her career. Andrews has to go out on the sidelines and the locker room and deal with large grown ass men who play a game that can generate a lot of emotion. If she is perceived as timid or afraid, how much trust will she get from these men?

Nevertheless, the media insists on forcing victimhood on Andrews. Specifically inflicting her with the “white girl victim” label because she is white woman and her value in society has according her this status even though she clearly does not want it. This reaction is a toxic mix of racism and sexism. Fear of the big black man unable to control his emotions and only seconds away from hurting or raping a white woman has been embedded in American society since slavery. There is a reason why Birth of a Nation was the highest grossing film in American history for twenty – five years.

I honestly struggled with writing this post. Recently, I have been consistently disappointed with white feminists’ inability to identify or empathize with the issues that woman of color face. Time and time and time again. Fleetingly, I wondered at the fact that I was defending a pretty blonde white woman who objectively is accorded privileges by society that I will never have access to. Its likely that if Sherman had ranted in front of a black woman reporter the headlines would not have implied that she was scared. But the more I thought about it, the more I realized that 1.) ivory tower feminists arguing over whether white feminism is intrinsically racist had absolutely nothing to do with whether or not I should write about Erin Andrews; and 2.)  And the fact that Erin Andrews is accorded privileges that I do not have honestly doesn’t take away from the deep empathy I feel on her behalf. As a professional and as a woman.  And as the media’s reporting on Shermangate reveals, ultimately, privilege doesn’t protect you against sexism.

3 comments for “Richard Sherman, the rant and white girl victimhood: what the media isn’t talking about”