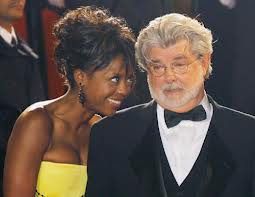 Last week,  George Lucas  won an Emmy. But that wasn’t the big news story that came out about Lucas. Instead, news organizations made much of Lucas’ embarrassing slip up during his speech when he confused the NAACP (National Association for the Advancement of Colored People with the NCAA (National College Athletic Association). While incredibly awkward,  perhaps the slip up was Lucas’ subconscious bragging about the amount of game he used to attract his new wife, Mellody Hobson.  Yes, the 69 year old George Lucas married the 44 year old Hobson this past weekend in Chicago, Illinois.  It is well known that Lucas is a billionaire, so marrying someone younger and more attractive to him is not a complete shock.[1  However, Hobson, the President of Ariel Investments, is worth millions herself.  (although now she is probably worth billions) In other words, Hobson was living a very comfortable life before she met George Lucas and this seems like a genuine partnership between two highly successful business people.

The couple notified the press of their engagement in January, but no one seemed to know that the wedding was taking place last weekend.  Luckily, the celebrities in attendance took to twitter to announce the nuptials with Samuel L. Jackson notably tweeting, “Let’s give a Galactic shout out to Master George Lucas & his bride Melody on this their wedding day!! Congrats!!!!!!”

As for the couple’s future plans, Lucas recently sold his entire business to Disney for over four billion dollars.  Nevertheless, the great Yoda once said, “Always in motion the future is” and despite George Lucas retiring from Star Wars, I don’t think he is going to fade into anonymity.  Lucas has stated that his plan is to donate most of the money he has earned to education initiatives.  With her business background, it would not surprise me to see Mellody Hobson Lucas take an active role in many of Lucas future philanthropic endeavors and be a powerful charitable force in the mold of a Melinda Gates.  I am looking forward to monitoring this couple and reading about their future work.  May the force be with them.

[1 I was hesitant to poke fun at Lucas appearance since I kept hearing a Yoda voice in my head saying, “When 69 years old you reach, you look as good, you will not.”