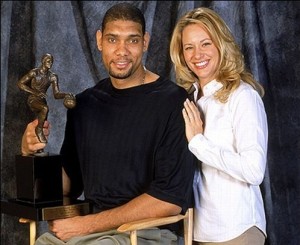 Last week, to honor the start of the NBA Finals, this site featured an article about former Finals’ MVP, Dirk Nowitzki and his thriving marriage. This week we are featuring a current participant in the NBA Finals, Tim Duncan. Unfortunately for Timmy, he is going through a nasty divorce with his wife of 13 years, Amy Duncan.

Tim and Amy met in college at Wake Forest and they seemed destined for a strong marriage. A 2003 Sports Illustrated Article predicted the couple would be married for 30 years. They were  18 years off as Amy Duncan filed for divorce in March . Granted, when the NBA playoffs began this year, none of the Sports Illustrated writers picked the Spurs to make the finals, so their predictions aren’t worth much.

One person who did pick the Spurs was Tim Duncan himself, who told the San Antonio Judge handling his divorce that his job “is currently making extraordinary demands on him and hopefully will continue to make those demands for the next 30 or so days.” If you do the math, Tim Duncan was discussing playing in the NBA Finals, although he did use the word hopefully, so that’s not exactly a prediction. Either way, Tim Duncan is playing surprisingly well in this year’s Finals for a guy going through a messy divorce.

And how messy is the divorce? According to the San Antonio Express News, Duncan suspected his wife of cheating on him and hired private investigators to follow his wife. The investigators confirmed Duncan’s suspicions. (Which I am not surprised at. . . if you are hiring a private investigator to tail your spouse. . . you are already in the danger zone) In sum, Amy Duncan decided to buck stereotypes and be unfaithful to her rich professional athlete husband instead of the other way around. While rumors of the alleged affair have not been publicly confirmed by the parties involved, interestingly Amy hired Richard Orsinger, the same divorce attorney who represented Tony Parker in his divorce from Eva Longoria. In case you’ve forgotten, at the time of the divorce, Parker was accused of having an affair with his teammate’s wife. I wonder what life is like for the San Antonio attorney who is slowly building a reputation as the “adulterer’s lawyer?” (I’m seeing a great billboard and bumper sticker for any attorney who might be reading this)

Anyway, Tim is probably heartbroken, but I have some advice for the native Virgin Islander. Go win the championship and then become sport’s most sympathetic divorcee. (In other words, the anti-Tiger Woods) Then come back to Saint Croix and find yourself a nice Cruzan woman. I know from experience that Virgin Islanders make the best partners.

← Maybe I am just a hata: Blogger tells black women they should stop focusing on earning a degree and focus on getting married instead.
George Lucas’ One Shining Moment →

1 comment for “No Longer a Couple … of the Week”