Mindy’s a neurotic mess who still keeps it together . . . like pretty much every professional woman I’ve ever met.

The Mindy Project is the brainchild of Indian American, actress and writer, Mindy Kaling and the show follows the ups and downs of her career and love life as Dr. Mindy Lahir. Mindy is whip smart, overly emotional, messy, self-obsessed and neurotic with occasional streaks of sweetness. On the first episode, she proceeds to get drunk at her ex-boyfriend’s wedding and give a speech that references him cheating on her with his current wife. It devolves from there and culminates with Mindy falling into a pool and getting arrested for drunk and disorderly conduct. . . and yet an hour after being released, Mindy is at the hospital, handling her business and doing bad ass doctor stuff. I am not saying this is the right way to live, but Mindy’s behavior is an accurate reflection of how a lot of people I went to law school with (*cough* including myself *cough*) lived their lives. Personal Life = mess, Professional Life = together. 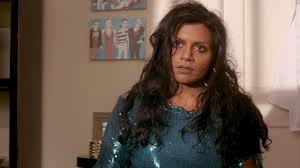 Maybe it’s because we were all a bunch of nerds who focused so much on school that when confronted with real life social situations we didn’t know how to handle stuff. I don’t know, but seeing this dichotomy reflected on TV is a refreshing change. I know shows like Ally McBeal, Girlfriends and Grey’s Anatomy follow the same trope but I never connected with those shows. I guess because their idea of a mess was usually really messy, like “I am secretly carrying your baby” messy, whereas Mindy’s messes reflect my reality. 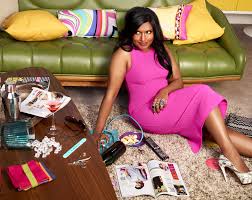 The ABC Family show Bunheads does a great job of slyly inserting pop culture references into character dialogue. Shows like Gilmore Girls and Dawson’s Creek (R.I.P) were known for intertwining winking pop culture references into the everyday lives of the characters. But Mindy doesn’t just talk about pop culture. She loves pop culture. The same way I love pop culture. It’s embedded in her life. It’s not just that throughout the season, Mindy is shown reading Us and  People Magazine, its that Mindy uses pop culture to navigate life. When Mindy decides to get a gynecological exam from her fellow doctor, Danny Castellano, he has to weigh her. Mindy is nervous about stepping on a scale in front of him so she channels her pop culture warrior spirit, appropriately named “Beyoncé Pad Thai”[1]  to help give her strength. This is totally something I would do! 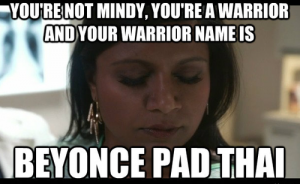 Whenever Mindy reports to the hospital to go do whatever it is doctors do, the producers of the show have made the very awesome choice of always playing an M.I.A. song. Most notably M.I.A.’s “Bad Girls”  which starts with M.I.A. growling out “live fast, die young, bad girls do it well.”

Is rapper/songstress M.I.A. referencing diagnosing a patient with gestational diabetes when she raps about “bad girls doing it well?” Probably not, but the Mindy Project recognizes that secretly every nerdy chick who becomes a professional, sort of feels like a bad ass when you do your job well, whatever it is. When I was in law school, I’d play Akon and Young Jeezy’s “Soul Survivor” every morning before contract law because it made me feel like a gangsta . . . a gangsta of law.

The Mindy Project doesn’t apologize or obsess over Mindy’s weight.

Some random website I found claims that the average size of actresses on t.v. is a size zero. True or not, I think we can all agree that actress Mindy Kaling is larger than most of the lead actresses you see on t.v. On most sitcoms the character of Mindy Lahri would be regulated to the funny best friend because of her dress size. 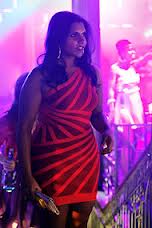 Yes, we live in a society were this is considered “big”. **hits head against desk**

But on the Mindy Project, Mindy’s weight only matters in that real things happen to Mindy. The type of things that happen when you are an attractive woman who doesn’t reflect the body size society expects you to be. On one episode, Mindy makes a quip about Danny’s divorce and in an effort to hurt her, he tells her she needs to lose a few pounds to get a man. Danny’s comment stops the conversation and Mindy was clearly hurt by it. But she quickly got over it. Mindy didn’t go home and sob her eyes out or stop dating until she lost weight. Nothing changed; 1.) because Mindy has a life to live and 2.) because her body weight is normal. And the show really strives to reflect this belief. Sheila Moeschen of Huffingtonpost.com explained it best when she noted in a recent article about the Mindy Project and it’s approach to weight,

On the show, Lahiri is a woman who does not attempt to hide, excuse or explain away her body. After all, why waste time obsessing over a perfectly awesome regular body when there are so many other things worth obsessing over, like the best rom-com moments, hot clergymen or the perfect non-slutty Halloween costume?

I totally agree with Moeschen! I love the way creator Mindy Kaling has treated her weight on the show (i.e., in a body positive, realistic way that doesn’t interfere with Mindy’s life) and I strive to approach my weight the same way. Its kind of sad that the Mindy Project’s unique (by unique, I mean common sense) way of dealing with Dr. Mindy Lahir’s weight and body is considered a refreshing change from standard television. Shouldn’t this be the way all t.v. shows approach weight?

The Mindy Project doesn’t pigeonhole Mindy because of her race 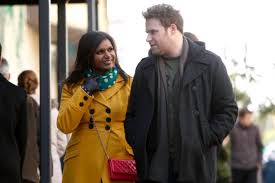 As of the Season 1 finale, Mindy has not dated an Indian-American man, despite the perception that Indian Americans do not date outside their race. And this seems to confuse and upset some people.  My favorite feminist blog writer, Dodai Stewart recently wrote about this dichotomy on Jezebel.com. In an article entitled, “Mindy Kaling Only Makes Out With White Guys”, Dodai had this to say,

Still, in the 23 episodes that have aired so far, despite announcing “black guys love me” at a club, Mindy Lahiri has only dated and slept with white men. Her love interests have included characters played by Ed Helms and Bill Hader. Dr. Lahiri never says that she’s only attracted to white guys, but if you check out the love interests (in the image above), it’s fairly obvious that the casting notes are very specific. (Granted, some of these actors are friends with Mindy Kaling, and wanting to work with friends is understandable.

I like that Dodai’s throwaway note is “granted some of these actors are friends with Mindy Kaling, and wanting to work with friends is understandable.” I think that statement actually explains a lot more than Dodai is willing to concede. 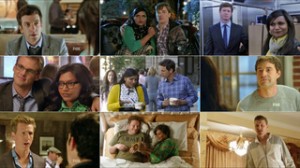 Creator Mindy Kaling wrote for and co-starred on the “Office”. She has been involved in comedy for a while. Of the people she had dated on the show, most have been  former co-workers or comedians (Ed Helms = coworker “The Office”)(BJ Novak = coworker “The Office”)(Bill Hader = comedian)(Seth Rogen = comedian)(Anders Holms = comedian). Dodai reached out to blogger Nisha Chittal, who is Indian American and has defended Mindy’s dating choices in the past, to get her take on Mindy’s dating life. Chittal stated,

I actually think it’s really interesting that Mindy Lahiri dates white men — I saw it as Kaling making a conscious decision to refute the stereotype that South Asians only date other South Asians. (In my own life, I can’t even count how many times people have tried to set me up with Indian guys because they just assume that’s my thing, or outright ask me if I’d ever date a non-Indian guy. ) To me, it’s refreshing to see an Indian American woman on TV dating white men because it challenges the audience’s assumptions of Indian American women. More interracial couples on TV is a win in my book!

I don’t care whether Dr. Mindy Lahiri’s dating choices are a secret “f u” to stereotypes, creator Mindy Kaling’s personal dating preferences or a way to gain viewership by getting her friends/ big name actors to guest star. I just enjoy the fact that Mindy Kaling hasn’t explained or apologized for her dating choices, either on the show or in real life. I want Mindy to date people of different races because I’d like to see her dynamic with other cultures, especially after her claim that “black guys love me” (and the appropriate follow up by her co-workers that she was being racist) but I love that the show is refuting stereotypes and not pigeonholing Mindy. When it comes to relationships, I don’t want to be pigeonholed or live by some stereotype of what I should be like, and it is refreshing to see this dichotomy on t.v.

This is unabashedly my favorite show on television. Season 1 has just finished, but I recommend watching it on Hulu Plus.

[1] Because Beyoncé is a bad ass who rules pop culture with an iron fist.

← Couple of the Week
Maybe I am just a hata: Blogger tells black women they should stop focusing on earning a degree and focus on getting married instead. →

2 comments for “The “Me” Project: Why I love Dr. Mindy Lahri”