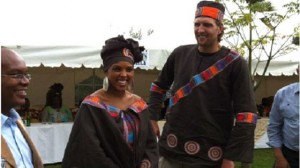 To honor the start of the NBA Finals, we present you with the 2011 Finals MVP Dirk Nowitski and his lovely wife, Jessica Olssen.  Dirk married Jessica in 2011 and honored Jessica’s Kenyan roots by having a traditional Kikuyu wedding ceremony.  Dirk later stated that “Jessica is probably the best thing that happened to me this year.” In other words, Dirk proclaimed that his marriage was better than taking home Finals MVP (who knew Dirk had game off of the Court?).

Olsson, an Associate Director of the Goss-Michael Foundation Art Gallery in Dallas, was raised in Sweden by her Kenyan mother and a Swedish father.  Her two twin brothers, Martin and Marcus Olsson play professional football (not the American kind) in the English Premier League.  Olsson is a quite a catch and definitely a notch above Dirk’s ex-girlfriend Cristal Taylort, a.k.a. Dirk’s “little jailbird.”

Olsson and Nowitzki received more good news this spring when it was revealed that Olsson is pregnant with the couple’s first child.  In a recent interview, Dirk announced that the baby should be born before the NBA season starts in October. 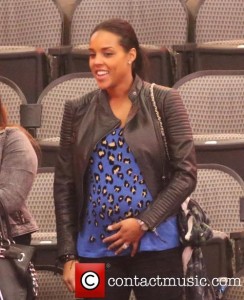 Dirk is one of my favorite basketball players and I am very happy for him.  I hope everything turns out well, considering the last time Dirk thought he was going to be a father.

← Heckling Michelle Obama is like talking back to your mom . . . its not going to end well
The “Me” Project: Why I love Dr. Mindy Lahri →

3 comments for “Couple of the Week”