Don’t make me step off this lectern

When public figures are heckled, they either A.) ignore the heckler and let security deal with it (“don’t tase me bro“) or B.) they try to engage the heckler in a polite and respectful way.  Last month, when President Obama was heckled during his speech on national security, he acknowledged the heckler and stated that “their voice was worth listening to.”

However, there is one other way you can handle a heckler and that’s the Michelle “I ain’t never scared” Obama  way. Buzzfeed.com reports that the  First Lady  was heckled at a private fundraiser Tuesday night and pressed for action on why her husband has not taken to issue an executive order banning federal contractors from discriminating against LGBT employees and job applicants.

During the First Lady’s speech, the heckler, later identified

as Ellen Sturtz from LGBT rights group GetEqual, began yelling. Michelle immediately stopped her speech and said“One of the things that I don’t do well is this,” she said to applause from most of the guests, according to a White House transcript. “Do you understand?”

Then the First Lady CAME DOWN FROM THE LECTERN and walked directly up to Sturtz.   Michelle then asked the crowd if they wanted Sturtz to take the mike or let her finish her speech.  (“Listen to me or you can take the mic, but I’m leaving. You all decide. You have one choice.”)  Jezebel.com reports that the crowd immediately began to shout that they wanted the First Lady to stay, and a woman seated near Sturtz told her, “You need to go!”

Sturtz later told the Washington Post that she thought the First Lady that she was caught off guard by the First Lady’s upfront response to her heckling, stating “She came right down in my face, I was taken aback.”

The right to have your voice heard is important, especially on issues involving civil rights.  But I am glad Michelle was “bout it” on this one. I’ve never liked heckling.  I was raised to believe that interrupting someone when they are speaking is the height of rudeness. And even the idea of  interrupting someone giving a speech makes me cringe.  So I am glad Michelle Obama confronted the heckler. And I am not surprised that she did. The First Lady is beautiful, accomplished and  intelligent. But people forgot, Michelle was born and raised on the SOUTH SIDE  of Chicago. That place is like America’s Sarajevo. The First Lady ain’t taking no disrespect. 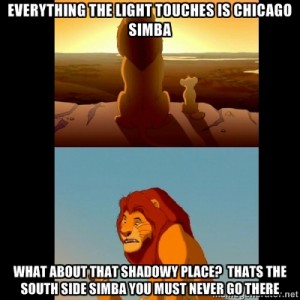 ← Well, color me surprised: did Senator John McCain’s son marry a sista?
Couple of the Week →

3 comments for “Heckling Michelle Obama is like talking back to your mom . . . its not going to end well”