Webster’s dictionary defines race as: (1) a category of humankind that shares certain distinctive physical traits; (2) a class or kind of people unified by shared interests, habits, or characteristics

If the phrase refers to the second definition of race, speakers should ask themselves if the group of people they are “not seeing” want to be “seen.” Different races and ethnicities have their own history, culture, family, and traditions. These traditions define who we are. When I hear “I don’t see race,” it seems like an attempt to advocate a future were humanity stops focusing on differences and treats all people the same. This future “color blind” society is a future that some see as progress. I understand the sentiment, but it is also important to embrace other cultures and not try and force everyone into being the same. 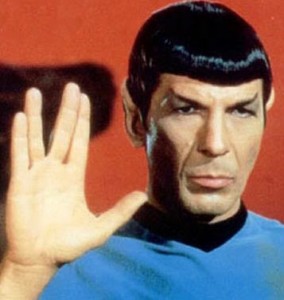 When I think of the future, one distinct image comes to mind, Star Trek (if you are person who “doesn’t see Trekkies” you can stop reading). The original Star Trek was at the forefront of diversity in television. Kirk was the first to kiss a black woman on television and it was implied he hooked up with an Orion (the green people). There is no way that the show could have confronted difficult issues of race and diversity if the crew did “not see race.”

Let’s imagine for a second how illogical Star Trek would be if the crew ignored racial diversity. Picture a typical Star Trek scene; the Enterprise is under attack, some nameless crew member has recently died, and a main cast member (we’ll say Bones) was severely injured. Spock’s reaction to Captain Kirk would be to point that the Enterprise only had a 12.5% chance of survival. What if Captain Kirk then said, “Spock, how can you be calculating survival chances when our best friend is severely injured and people are dying all around us?” Spock responds, “It is in my nature to be logical in a time of crisis because I am a Vulcan.” Kirk counters, “a Vulcan? I don’t know what that is because I don’t see race.” In a confused tone Spock would quip, “Captain, you have noticed my ears, my eyebrows, and overall temperament was not the same as yours. Clearly you knew I was not a humanoid.” Kirk arrogantly replies, “Sorry Spock, I don’t see race; you’re going to have to learn to be emotional like me when people start dying, we’re under attack, and the doctor is in too critical of a condition to operate on himself.” Captain Kirk’s response would undercut the whole point of Spock’s inclusion on the show. Spock’s cold Vulcan logic vs. Kirk’s fiery human emotion was and has been a huge part of the Star Trek universe and part of the reason fans love it so much.

Luckily, Gene Rodenberry was too enlightened to have this kind of scene take place. Again, conformity is not the answer to eliminating prejudice. Only when we all “see race” but choose to accept each other’s differences will we all “live long and prosper.”

1 comment for “You Don’t See Race? That’s Not Logical”