So actress Zoe Saldana says “people of color don’t exist” i.e., she doesn’t see race. . . because she lives in Narnia? My initial response was

But that would be immature and isn’t a very intellectual response to what I perceive is a genuine belief on Saldana’s  part. For a much more nuanced (and funny ) take on why seeing race and embracing diversity  is kind of an awesome positive thing, check out Aaron’s post ” You Don’t See Race? That’s Not Logical.”

Interracial (Nazi?) love in a time of war

Check out the unlikely (true) story of an African-American nurse and German prisoner of war who fell in love during WWII.  It really is remarkable story…though the New York Times sort of glosses over the “he was probably a Nazi” thing but I am assuming it’s because he married a black woman. . . which doesn’t really make it ok at all . . .  or maybe he wasn’t a Nazi. . . the article claims he only volunteered in the army to impress his dad . . . and Hitler. I am kidding. Just his dad.  But I don’t think he was a Nazi and  if I think about it too much, I will work myself into an existential crisis based on conflicting feelings about this seemingly lovely couple (one of whom might have been a Nazi)  who faced down racial barriers to be together. Anyway, it’s a really great story, as told by their son Albert, a trumpet player for the Duke Ellington Orchestra. 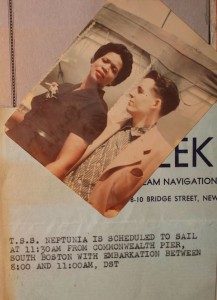 A Black Nurse, a German Solider and an Unlikely Romance . . . New York Times

← You Don’t See Race? That’s Not Logical
YOU’RE JEWISH? THAT EXPLAINS IT →