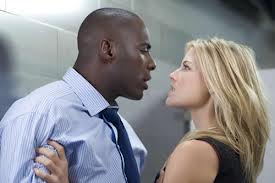 Idris Elba and Ali Larter mutually agreeing to hate on my relationship.

When you think of the type of people who hate on interracial couples, certain people come to mind. To be clear, I do not mean, violate federal hate crime law, KKK hating type of people. I mean the type of people who make sly comments about zebra couples or throw around words like “race traitor.”  For many, I think black women come to mind. At least the stereotype of the angry black woman, this time with her anger focused on the black man/ white woman couple.  A good example of this stereotype is Queen Latifiah’s character in Spike Lee’s Jungle Fever .  In Jungle Fever, the Queen plays a waitress who becomes visually upset  when she is forced to serve the black man / white woman couple. As Wesley Snipes (clearly the black man) reacts to Latifah’s rudeness, she gets angrier and angrier until she flips out on them.

Jungle Fever came out in 1991. Since then, Spike Lee has moved on to permanently being the angriest Knicks fan ever while interracial pairings have steadily risen. And yet, the belief that black women are the biggest hatas of interracial couples still prevails. I call b.s. on this stereotype. I am not saying that black women don’t hate on black men for finding the Coco to their Ice T. But we (black women) tend to internalize our emotions. In 2010, singer Jill Scott wrote an article for Essence magazine about interracial dating. In the article, she  describes “feeling a little wince”  when a black friend told her he married a white woman.  She explained that her “wince” was not personal but based on the history of black america. “When our people were enslaved, ‘Massa’ placed his Caucasian woman on a pedestal,” Scott writes. “She was spoiled, revered and angelic, while the Black slave woman was overworked, beaten, raped and farmed out like cattle to be mated.” Jill Scott’s reaction to the blkman/whtw couple is much more realistic than Queen Latifah’s.  Is Scott’s internalizing of her emotions a good thing? No. But Jill’s “wince” is her own pain.  When I compare the “wince” to the hateful and hurtful things said to me by black men and white women, because I am 1/2 of interracial couple, I wonder how black women have held on to the title of “most hateful” for so long.

I met Aaron in law school. He was the smartest person I’d ever met, funny, tall and attractive.  He made me laugh, introduced me to the new Battlestar Galattica, played the piano and (at the time) was emotionally unavailable. Essentially, my dream man.  Aaron and I became friends and later began the type of overwrought, emotionally unstable, on and off passionate relationship that often happens when two law students fall in love.  There was one difference. He was white and I was black. I quickly learned that for some black men and white women, our racial makeup changed everything.  Some (to be clear not all) Black men called me a “race traitor.” I was told that I must be afraid of black men. I was asked on more than one occasion, what black man had done me so badly that I ran to a white guy.  I tried not to get angry in reaction to these statements but it was really hard . . . I liked these men. Some of them were  friends.

Over the course of many conversations, I  came to realize that many of these men truly felt that as a black woman, I needed to “be there” for the black man. Their mindset appeared to be that society has treated black men so poorly that by dating a white man, I was now complicit in the degradation of the black man, despite the fact that by and large, these men were educated, attractive and with a bright future ahead of them. This sounds like I am being purposefully naïve, but I promise you, I didn’t understand how I could be accused of not loving black men. I am black. I have loved and been loved in return by black men. I love my grandfather, uncles and nephews. I love my father. They are black men.  My skin color bears the same perceptions and history that their skin does. We are bound no matter who I choose to form a relationship with. And yet, none of this mattered.

And White women . . . it was the same thing.  Their comments were not direct or outright but still intensely hurtful.  The same white women who sat next to me in class, talked with me, got drunk with me,  some of whom I thought of as close friends could not seem to fathom what the hell Aaron and I were doing together.  I know for a fact that several of these women asked Aaron why he was with me instead of a white girl! Essentially implying, and in one instance, saying outright that there must be something wrong with him if he felt that he could only date a black woman and not a good white girl.  This hurt. At the time, the deepest friendships I have enjoyed in my life had been with women.

I have moved on since law school. But the comments still happen and it still hurts.  Recently, I stumbled on an article that put some perspective on this troubling issue. Entitled “  His parents said, ‘Not with a white girl” actress Diane Farr writes in an op-ed piece for CNN’s Defining America series  of her surprise when she discovered that her Asian boyfriend’s parents did not approve of his white girlfriend. Farr states, “yes, it was white privilege that blinded me to the fact I might be the bottom of the barrel on someone else’s race card.”  Farr goes on to explain that as a white woman she never fathomed that someone would not see her as a great catch for their son, even if their son was of another race.  When I read the article, I thought “oh, that explains it!”  For me, the idea of “privilege” being the impetus for the behavior of some black men and white women, made a lot of sense. Not “white privilege” but “race privilege.”  There is an innate sense of entitlement culturally embedded in some white women and black men. A belief that because Black men have been through so much, black women should at the very least be there for them. Thus, as a black woman, my ultimate relationship goal should be to have a relationship with a black man. White women have been and are still at the top of the cultural hierarchy of what Western civilization defines as womanhood and beauty.  So in Aaron’s case, his ultimate goal should be to be with a white woman.  Our coupling throws this dynamic off.

I don’t have a neat conclusion to this  post or to the problem of race privilege. I can’t change race privilege, it is an internal belief with outward manifestation.  I can only say that I love Aaron. He loves me.  And if I don’t care what color the person you date happens to be, please do the same for me. We all just want to be happy. 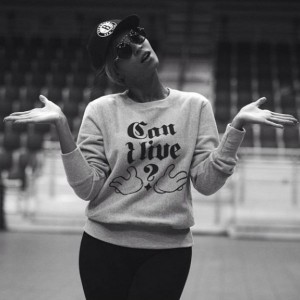