THIS SHIRT MAKES ME ATTRACTIVE, RIGHT?

I LOVE PEOPLE WATCHING. Especially at twenty-something bars where men and women slide around the room awkwardly trying to strike up conversation with members of the opposite sex.  The best part of this charade is seeing a guy walk up, hit on a girl, strike out, and then hit on the next girl at the bar until there is no one left. Recently, I had a particularly good time watching a white guy, with blonde hair and wearing a Wu Tang shirt, fail at hitting on every black woman at the bar. They didn’t find the slightest thing about him charming. You could tell that Wu Tang shirt guy thought that the ironic nature of his shirt (it is ironic?) would be a conversation starter, but no one was obliging. In fact, at one point he hit on one of my black female friends when a hip-hop song came on the bar speakers.  He bopped his head and shouted, “god, I love this song, how about you?” She responded, “I have never heard of this song,” and walked away.

I almost felt pity for the guy until he finally got some attention for the shirt. A blonde-haired white girl walked up to him and said, “I love the Wu-Tang Clan,” while giving one of those sorority giggles. (on a side note, do people age out of the sorority giggle or are these same girls going to be doing that when they are 80 years old and going buck wild at the nursing home) Anyway, they began dancing together, laughing, and seemed to hit it off. I am certainly not jealous as I am very happily in a relationship, but seeing this guy’s success baffled me. Was the Wu Tang shirt and subsequent rejections some kind of well thought out long term game to eventually pick up that white chick? Or did the guy actually think he was going to pick up black woman and got lucky with the white girl? Was it some kind of combination of both?

One strong conclusion I can take from this event is that black woman will never be attracted to a white guy based upon how much subversive black culture he has consumed. To all white guys out there: because a black entertainment act scares your white grandmother doesn’t mean black woman are going to be impressed that you have looked past your white grandmother’s fears and might actually like it. Now, if you want to use your love of provocative black figures to lure white woman in some kind of “we are bonding because we both want to seem down with the black community, we both keep getting rejected, and now we have found each other kind of way” go right ahead. It worked for the guy at the bar. Besides, I assume these are the type of people who get married, invite all white people to the wedding, and then stir up the in-laws by making their wedding dance “Baby Got Back.” If you don’t know what I’m talking about, there are about 500 examples of this on Youtube. Finally, when that couple has kids and dudebro decides to coach the soccer team, it will end up looking like this……. 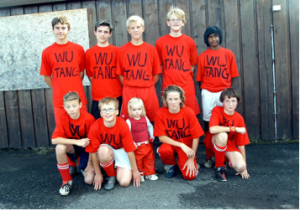