Last year’s A’s mom and stepdad decided to visit him in the Virgin Islands. He was excited about their visit. I was excited too. By excited I mean “throw up in my mouth” nervous.  Up until then, I’d never met anyone in Aaron’s family…and his mom is a Southern Jewish Republican. So is his stepdad. Forgive me for stereotyping (or don’t, I am going to do it anyway) but I really didn’t see them being all that enthused about his black girlfriend. Still I knew he’d told them about me and they knew they were going to meet me. I tried to convince him that it was better if I mysteriously came down with some tropical disease while they were here (maybe jungle fever? Haha…sorry) but for some reason he wasn’t feeling it.

Once I realized I wouldn’t be able to wiggle my way out of what I was sure going to be an awkward racially charged situation, I decided to do what any good lawyer would do and mitigate any potential damage. What I mean by that is, I decided that I was going to tone down what I considered my  “blackness.” I know it sounds bad but I don’t mean I was going to start using skin bleaching creams. I am proud of being 5’11, cinnamon skinned and strong. But I decided to you know, calm it down a bit. I decided that while A’s parents were visiting; I’d do away with the big earrings, bigger hair, short tiny dresses and colorful 3 inch wedges that I usually wore.  I even enlisted the help of a suitably enabling friend to craft a “non – black” look that would help me fit right on in with A’s family.

Before you say anything, I know how deluded that sounds. Even thinking about it now, I wince..and when I think about what I actually wore the first time I met his mom and stepdad…shudder.  I remember it vividly. I walked into the restaurant wearing khaki pants (yuck) a green collared button down shirt (gross) and it’s hard for me to even type this…brown loafers. I also had tasteful pearl earring in my ears. I literally looked like I worked for Best Buy. I am surprised one of the other customers didn’t come up to me and ask me if Captain America was out on blu – ray yet. 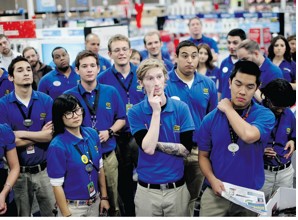 That’s not even the worst part. The worst part was that while I looked like Milton Waddams from Office Space, A’s mom was dressed like a trendy gypsy.[1  She had on a beautiful colorful dress and large hoop earring. Her hair was also bright fire engine red.  I felt like an idiot.  Not only had I sacrificed who I was to fit some ridiculous idea of what and wouldn’t make white people uncomfortable, I’d done it for no gosh dang reason. A never said to me, “my parents will be more comfortable if you dress like you work for an electronic store” and it was clear the first time I saw his mom, she certainly would not feel better about me because I looked so “calm.”  I sat there for that entire painfully awkward breakfast and had one little epiphany after another.

I realized that the first time meeting between a girl and her boyfriend’s parents is going to be awkward. Black, Lithuanian, Navi, it doesn’t matter. Sure race might play an issue in A’s family and their ultimate comfort level with me but dressing like someone I wasn’t, was not going to help. When it comes to meeting your child’s partner, parents can always smell fakeness a mile away.   Second, I realized that I dress the way I dress because it makes me feel confident and sexy and shows off all the weight I’ve lost in the last few years. As hokey and lifetime movie ending as it sounds, I ultimately realized that if I wanted A’s parents to know the real me, I was going to have to dress like me.

[1 I know that the politically correct term is “Roma.” I just think gypsy sounds cooler.