A DEBATE ABOUT BACK TO THE FUTURE 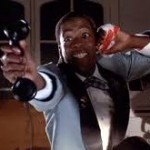 Not Racist: It is well documented that white people stole Rock and Roll from black blues musicians. However, Chuck Berry also stole from other blues musicians and the exchange between Marty and Chuck Berry was not meant to be taken too seriously. The argument would be stronger if Johnny B. Goode was the first Rock and Roll song, but it isn’t. In 1954, teenagers were already bopping to “Rock Around the Clock” and Elvis’ 1954 “That’s Alright Mama.” Rock and Roll sounds would not have been foreign and Chuck Berry would not have needed inspiration. It’s actually less racist and more a historical flaw.

MAYOR GOLDIE WILSON IS A STEREOTYPE 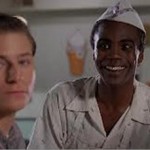 Racist: There’s no explanation for Mayor Goldie Wilson who creates plenty of subtle and not-so-subtle awkward moments. The 1980s Hill Valley that Goldie rules over is dirty with porno theaters, homeless, people, and Libyan terrorists roaming the streets. Meanwhile, in the whitewashed 1950s, (led by the older white Mayor Red Thomas), the streets are clean, the school is new, and while segregation is rampant everything looks too polished to notice. In this serene 1950s Hill Valley, the audience is allowed to see the future Mayor Goldie working at the Happy Days like diner where he discusses his plans to achieve more out of life. Marty tells him he is going to be Mayor and Goldie smiles at the thought and remarks that when he is mayor he is “going to clean up this town.” His boss scoffs at the idea of a “colored mayor” and tells Goldie he can “start by sweeping the floor” (cue the audience laughter) . This scene would be funnier if we didn’t already know that Goldie does not clean up the town. In fact, the downtown gets dirty and rundown. The fact that Twin Pines Mall used to be a farm shows the audience that at some point part all the white people in Hill Valley migrated to the suburbs. While I acknowledge the 1950s scene was in some twisted way supposed to show that progress was made for minorities over the course of 30 years, the images themselves represent a kind of nostalgia for 1950’s Racism since after all, the downtown was clean.

Not Racist: The counterargument to this is that within the context of when Back to the Future came out (1985), the filmmakers were aware of the racisim inherent in positing that Hill Valley degrades under the tenure of a black mayor and use this supposition as a sharp criticism of the Regan era. What I mean by this is that 1985 was the height of the Regan era and America was being swept up in a wave of conservatism. Many politicians talked about returning to a world that resembled the 1950s and Regan himself declared that America needs to “get back to the future.” However, underneath this nostalgia is sharp criticism. In particular, Doc Brown laughs at the idea that an actor could become President when Marty first arrives in 1955, and the overall theme of the movie is about striving for individual accomplishment in a world preaching conformity. It is said throughout the movie, “if you put your mind to it, you can accomplish anything.” Mayor Wilson represents how society has told him he can never be mayor, but he is determined to achieve against the odds. George McFly loves science fiction, but 1950s America views him as an oddball and he is considered a dweeb. When he overcomes his fears about being different, he becomes a best-selling author. Scientist Doc Brown portrays this same message when he completes his life long quest to build a time machine despite his earlier failures. Marty’s mother lies at the beginning of the movie about not going out with boys while in reality she was smoking cigarettes, drinking alcohol, and flirting with guys. She is a hypocrite in every sense of the word in that she yearns for the good old days of the 1950s, while ignoring that she was a rebel youth who hated the ideals at the time. By the end of the movie she is an independent person who lives in the present and not the past. Mayor Goldie Wilson’s tenure as mayor was neither the reason for nor the cause of Hill Valley’s downturn, America was. He is a part of the film to illustrate that the 1980s was not perfect and neither were the 1950s. The overall message is that conformity will always try to bring you down, but “if you put your mind to it, you can accomplish anything.”

WHERE ARE THE BLACK PEOPLE ? 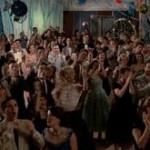 Not Racist: What about the band, Marvin Berry and the Starlighters who save Marty McFly’s life when they break him out of the trunk, confront Biff’s gang and complete their heroics by aiding Marty in his rockin rendition of “Johnny B. Goode?” The band is awesome.
Racist: So the black people save the day by acting cool, smoking “reefer,” and shucking and jiving for the white folk in order to “save the day.” No stereotypes there. Besides, there are no black people at the dance? Yes, the band is hired by the whites to entertain them, but god forbid they actually be allowed at the dance. In the Disney movie, Uncle Remus saves the little white kids lives. However, they don’t play that Disney movie anymore. You know why? Because it is Frakkin Racist, that’s why. Uncle Tom Heroes are older than Uncle Tom himself and this was about the worst argument you could have made. I was on the fence before, but now I am just angry.

CLOSING REMARKS
Not Racist: Now that Racist has lost all objectivity, this seems like a good time to end the post. Remember kids, “if you put your mind to it, you can accomplish anything.” Unfortunately the things you accomplish might not be good things. For example, if you put your mind to it, you can find racism in anything, including Back to the Future.
Racist: Reciting lines from the movie is not going to change my opinion. While I admit that on a scale of 1 to Birth of a Nation this movie is much closer to 1, the question posed is Racist/Not Racist and the question does not deal with degrees. There is enough evidence for me to say racist.

CONCLUSION: You have heard the arguments and now it is time for you to decide. Back to the Future . . . Racist?/Not Racist?

For your viewing pleasure

← Couple of the Week
My Girlfriend is Not an Oreo →